Winds in Mediterranean sea, the “wind Rose” and wind scales

Wind is the rough horizontal movement of air whose (of which) we can recognize intensity and direction. To measure its speed we use the anemometer, that can have several measure units: 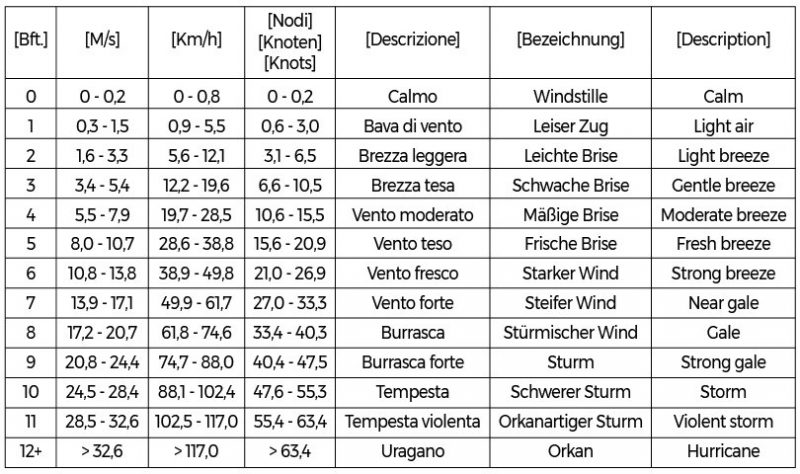 To describe wind direction we use cardinal points, in the Mediterranean Sea the winds are named after the cardinal point from where they originate, as shown in the “Wind Rose”. This latter compass traditionally uses as a point of reference the island of Malta, in the center of Mediterranean Sea. This location can help us understand the name given to the winds.

Tramontana (Tramuntana, Tramontane) is the typical name given to a cold northern wind. The name in Latin means “intra montes” (between mountains) because it was considered to have its origins in the center of the Alps, which were the considered North by the Ancient Romans.

Levante (Viento de Levante or the Levanter) is an easterly wind that blows in the Western Mediterranean. It rises in the central Mediterranean or around the Balearic Islands and blows westwards reaching its greatest intensity through the Strait of Gibraltar. This kind of wind is mainly moist, which carries fog and precipitation. It occurs especially between July and August. The name of the wind pattern comes from the word “levare” which in Latin means “to rise”. The Levante originates in the same direction as where the sun rises.

Scirocco, Sirocco or, rarely, Siroc is a Mediterranean wind which blows from south-east and comes from the Sahara and other North African regions. The Scirocco causes dusty, dry conditions along the northern coast of Africa, storms in the Mediterranean Sea, and cold, wet weather in Europe. The Scirocco’s duration may vary from half a day to many days. These winds blow more frequently, with speeds up to 100 km / h, in spring and autumn reaching a maximum in the months of March and November. The name was given because of Syria being south-east of Malta.

Ostro is the traditional name of a southerly wind in the Mediterranean Sea, especially found in the Adriatic. Its name derives from the Latin name Auster, which was also a southerly wind. It is described as a warm and humid wind that often carries rain.

Libeccio is the south-westerly wind which predominates in northern Corsica all the year round; it frequently raises high seas and may give violent westerly squalls. It is most persistent in the summertime. The origin of the name could be traced back to the fact that in Malta it appears to be blowing from Libya.

Ponente is a fresh wind blowing from the west, which is typical of the summer afternoons in the Mediterranean area. The name comes from the Latin verb “ponere” which means “to put down” or “to lay down” (or “to lie down”) and it refers to the fact that Sun goes down in the West. Its effects are felt above all on the Tyrrhenian Sea and on the central-southern Adriatic Sea.

Maestrale is a cold and dry North-West wind. It usually blows during the winter in the Mediterranean Sea, especially in the Gulf of Lion and in Sardinia. The name was chosen because on the island of Malta, point of reference of the Wind Rose, it originates from Rome, which in ancient times was also called “magistra”.